Calling all bikers. We have been contacted by the family of a young lad called Sam, aged 20, who very sadly lost his life recently in a motorbike accident. They want to get as many bikers as possible to ride from the family home near Aldershot to the crematorium. So if you can spare an hour or so on wed 11th the address is Lower Weybourne Lane, Farnham GU9 9HL. If you can share this post I am sure many will respond and your efforts will be really appreciated by his family. You will need to be there at 11.30am Thank you.

We’ve had a good winter season this year, like every other year you’ve been kind to me by moving over and I’ve always said thank you (unless it’s raining and I need to focus). I never screamed passed you, frightening you in the process and more often than not, you checked your mirror. I thank you for both not hurting me and avoided us both being involved in a lengthy insurance claim where the only winners were the legal people. Sure we’ve had our moments when you pulled out in front of me, likewise I made the odd mistake too – we’re all only human and life has it’s distractions. If I ever saw a ‘Think Bike’ sticker in your back window, I’ve always given you a nod or just a thumbs up…even when that sticker was located in such a way that your rear visibility was hugely restricted. I do thank you for that odd time when I broke down, and without knowing me at all, you asked if I was OK and needed help. 99.7% of you are great, and we’re getting on nicely. 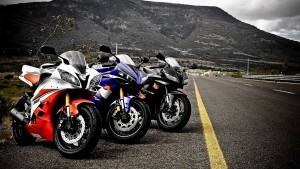 I’m writing to ask a small favour and I hope you’ll oblige. I have some colleagues called ‘Fair Weather Riders’ which will be arriving in their droves to our roads around about now. If you can, please take into account they’ve not been riding since last year and might be a bit rusty. They’ve been sitting in a safe car for the winter, probably behind you in yet another traffic jam, but now they’re out and making up for it. They will likely be in groups at the weekend and perhaps a warm evening during the week, roaring passed you as loud as they can. They’ll overtake where it’s best not too, and ride so close to the back of your car, they may as well attach a tow rope to save fuel. They’re going to push in between you and the driver in front, or run wide on corners they didn’t quite read correctly. They need their concentration so much that they’ll forget to thank you for moving over or for any kind gesture you might make.

Despite their initial failings, please be patient for the next few months and be assured they’ll only be around until September, October at the latest. I’ll be around too, I’ll be blending in with my colleagues but I’ll always be here.

I recently tweeted about the annual return of summer riders, because as we all know, they’ll wobble the bike out of the garage once more and wreck havoc on British roads round about now. Before I go on, I’m no angel, I do have fun from time to time when the conditions permit – but by riding through the worst weather this country can throw at us, I inevitably have the control and competence to deal with it. If I were able to speak to summer riders before they don their showroom condition leathers, I’d just ask them to give themselves time to warm up a bit, after many months in a cage performing their mundane slow speed commute to work. May be even take some sort of refresher course, there are plenty available – with some you only need to pay for someone elses’ petrol and surprisingly you WILL have fun.

All through the year, I try to be considerate to car drivers, waving when they move over, letting them know if they have a puncture, etc. Every time I do this, they link motorcycling to being a positive force. But any sort of biker experience is cancelled out when, for instance, a biker does 80mph+ through a busy shopping/pedestrian area. It sounds harsh, but putting aside connotations of injuring an innocent bystander, think of what that does to the reputation of biking. It’s the reason that every so often a speed limit is reduced, or getting a bike licence either becomes harder to get, or to provide. It’s inevitable that if this continues, getting a motorcycle licence will be so difficult, future would-be riders will give up and drive a Ford Focus instead,  without experience of the unique freedom and pleasures of two wheels. Gradually the few riders remaining will become too old to ride and slowly die out (hopefully by natural causes), the reminiscing will peter out and museums will be the only place to see a bike. May be I’m thinking too far ahead – may be I should act like everyone else and only consider the future in 2 year chunks? But eventually the future does happen, and the consequences of our actions today catch up.

Of course, anyone connected to the motorcycle industry isn’t going to support telling their most lucrative customers anything, as they smile all the way to the bank. Why would they? Who is going to damage their potential income by objecting to hobbie riders, we all have bills to pay after all. I may be wrong, but one of the reasons the CBT test was introduced, was because the motorcycle industry complained that they had no repeat business due to the death rate. So when a kid came in, instead of selling him a safer/slower bike, the dealer preferred to sell the more profitable/faster bike instead. There is no forethought into the future – the ‘big picture’ we hate any reference to. When a biker dies, he can’t buy that bike mag’, he can’t buy that shiny new white Gixer, and he leaves his family and friends with the worst attitude towards biking possible. Even if it was totally his (or her) fault, they will still refuse to blame the rider for his actions. Ride at 90mph in a 40 zone and other road users won’t be expecting a bike that genuinely  ‘appears from no-where’. I’m not denying at all that fault is never other road users, other people do make mistakes. But we are now at a point in human history where the existence of objects that cause harm to the innocent, are being questioned. For some reason those that are in control of them, are not. This happens in all areas of society, from food being the cause of obesity (instead of the actual hand, mouth and personal choices), to the biking culture as a collective being to blame, and not individual riders of varying levels of skill.

I’m not denying it, riding a bike is awesome, applying the original meaning of the word. I love the freedom it gives, the cheap acceleration it provides and the traffic efficiency you get as a bonus.

As a bare minimum, I just wish riders would adhere to these basic and common sense rules when riding:

Other than that, I wish you another great summer, keep the rubber side down ya’ll 🙂