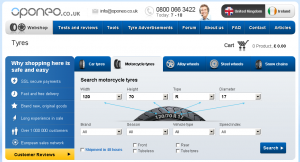 A friend told me about this strangely named company called www.oponeo.co.uk , he oddly thought they were from Holland, but they weren’t. So I wondered over to there website and had a butchers.

Very nicely laid out and easy to use.

I gave them a punt and for £194 (inc. delivery, VAT and all extras – not hidden at all), I got one of each of the following:

After the usual email notification, I received other emails stating delivery tracking links. Has to be said, these sent me to a very Polish website which google had to translate for me, but it was obvious enough with time and dates.

I also received a text message (SMS) at 8am on the day of the delivery, stating the estimated delivery time slot of between 3-4pm that day. It included the drivers name and ‘text back’ options to re-arrange delivery to a neighbour or deliver the following day, or day after.

A friendly pole’ in a large white transit van, nearly just left a card in my door, before deciding to venture into the back garden where I was sitting patiently in the sun (having taken the day off for the delivery). Nice round black things successfully delivered 🙂