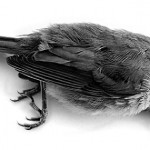 Riding North bound through the beauty that is Crowborough in East Sussex (see ‘Irony‘), I was riding at around 30mph…it was a 30 zone after all and I was feeling angelic. Suddenly, a solid fist sized object struck the front of my crash helmet and with an open visor, it would have hit me in the face if it weren’t for the shades I was wearing. My first thought turned to anger and then the assumption that children were having a retarded moment and had thrown a lump of mud at a motorcyclist. I turned around as soon as it was safe to, went back to the scene of the crime and saw no children, and no one just ‘hanging around’ with dried mud in their hands. Bizarre. Then I spotted something on the road…ummm, a brownish coloured dead bird about the size of a fist, then noticed the power lines directly above it. I was lead to the assumption that the bird fell off the over head lines (probably received a TAX demand), then ricocheted off the windscreen of an oncoming car, and consequently hit me.

In quite a few years on two wheels, I have to say that was a first!

Disclaimer: Birds were killed in the making of this blog post.