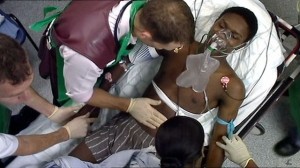 I caught a glimpse of this programme shortly after it came out, and I see it’s still on, which in this digital age means it must be popular. I refer to the digital age, because unlike the old analogue which provided no statistics, the new wave of digital broadcasting is like a statistical wet dream for the bean counters. They don’t have to ask test groups, they just know what you’re watching and when, then decide what stays and what doesn’t.

Keeping on track though, I’m not personally keen on these programmes for the obvious reason I’ve endured A&E to a great extent. Nearly 3 years on from my own definition of trauma, I still don’t like the sound of the machines I hear on this programme, as well as the reminder of smells. Of course I was too ‘out of it’ to recall the sights, due to the pain, medication and general disorientation. I even recall how staff were risking my life, but I was powerless to do anything about. On the plus side I recall the doctors who made decisions that probably saved my life.

My main point about writing this is because I can’t understand the human reason for wishing to watch a programme like this. If I’m a benchmark, anyone that’s experienced a severe medical trauma and been in A&E, won’t want to watch it. If they do, they may just want to process what they went through, or see it from another angle (one of hundreds of cameras apparently). That leaves those that haven’t experienced it – why would you wish to watch something that you would hope never happened to you?

Let’s get this straight, I don’t know you, the you that’s reading this, and I wouldn’t want anything to happen to you (unless you’re evil of course). But the laws of probability are that you will suffer some fate, whether it’s a cycling accident, public transport crash or even falling off your roof adjusting the aerial. So why spend your precious time on this earth, as you, observing the worst that could happen, to you. It’s bizarre really, we seem to have an addiction to viewing situations that start badly and then improve. Sometimes they don’t improve – this evening’s episode shows a person who fell from a great height and had probable brain damage. What are we supposed to gain from this information? Are we supposed to sympathise for the parents/children, those that we haven’t even met or have any social interaction with? What function is carried out by disconnected compassion?

Before you say it, yes of course I can chose not to watch it, and I use that choice and chose not too. All I’d say is if you have time on your side and you must watch some flickering light creating moving images, watch something funny or educational. Make the most of your life, not the least.